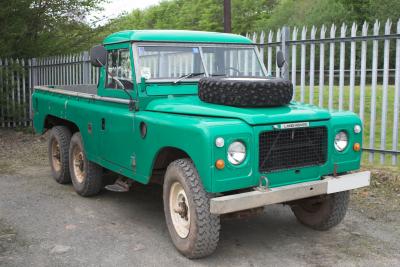 We get some interesting vehicles in at work... some more interesting than others. Just recently this little gem rolled in for a little bit of work.

It's a 6x6 Land Rover, based on a Series 3 Stage 1 V8... and built by Safir engineering. Now, 6x6s are rare at the best of times, but Safir vehicles are even rarer ! It's a really nicely put together vehicle, and it probably cost a load of money to build. (Safir are known for building Formula race cars) The owner was adamant that he wouldn't sell it despite my best efforts :'( A few more pictures can be found in the gallery