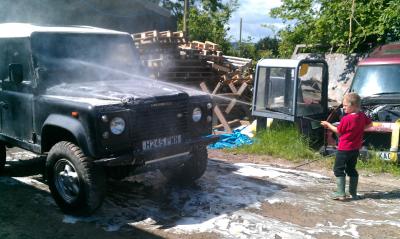 It doesn't seem like a year ago, but the MOT is due on the 90 again.   A quick once-over in the workshop and there doesn't seem to be too much wrong.

A couple of tweaks to the wheel bearings, fill up the washer bottle... that sort of thing...  until I got to the drop arm.

There was a bit of play in the drop arm ball joint, not much, but enough that I wanted to change it...  it turned into one of 'those' jobs...

I dutifully stripped the steering linkages off the drop arm, and dismantled the ball joint.  All fine and easy...  next, drift out the seat from the drop arm.   Not so fine and easy.  In fact, it wasn't coming out at all.

'Right said Fred'*  we'll take the drop arm off and do it on the bench.   (Cue laughter from anyone who has tried this job before.)    The drop arm had decided that it didn't really want to come off.   After much huffing and puffing, I got fed up and took the whole steering box out.

Ironically, this was the easiest job to do..  and so with the box out, I set about trying to get the ball joint seat out of the drop arm.  Well, I would have, except that I noticed the sector shaft was bent !

Now, don't ask me how on Earth the sector shaft got bent, but it was....   Looks like taking the box out was a blessing after all.   Thankfully I had a spare steering box in the shed, so I put the ball joint in that (the seat came out very easily from *that* drop arm !) and stuck it back on the Land Rover.

A final check over, a wash (with the assistance of my son) and it'll be off to the test centre on Monday, where all the things I have missed will be spotted by the tester and I'll get a massive fail sheet !

Got to love Land Rovers.

*Right said Fred was a song recorded by Bernard Cribbins in the 60s.  It involved the attempted removal of a piano which ended up in most of the house being dismantled.   (I think it was where the 80s band got their name from too).   Anyway...  here's a video of it !