New boots for the 90 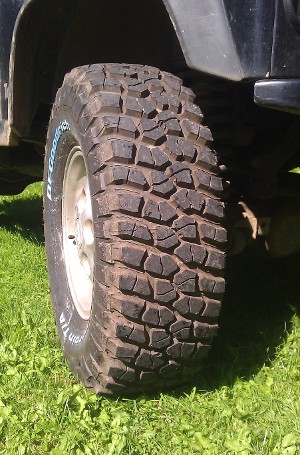 The time has come..  I've finally replaced the tyres on the 90.   I managed to wring every last mile out of my old BFG Trac Edge tyres, and a puncture in one of them was the catalyst for me to get something new.

I don't do many miles in the 90 any more, so I decided that a set of mud terrains were going to be the best option since I often find myself paddling around in the mud.   I had a look around at General, Cooper and a few others but when it came down to spending my hard-earned cash the BF Goodrich Mud Terrain still looked like the best value to me.

I've run them before, but never on the 90 so I was interested to see how they worked out.

This is the current KM2 version (which looks a lot like the Crawler).  The most obvious thing was how much quieter they are than the previous incarnation of the tyre.  Not all that surprising really, since EU noise legislation was one of the main driving forces behind the development of the new version.

Handling, grip, etc. all seem to be pretty much the same as with the KM so it's a nice, predictable drive even in the wet.    I went a bit wider with these than before, opting for a 285/75R16.  They tend to tramline a bit more than the Trac Edges, but that is to be expected (they were a 235 profile).

All in all, I'm really happy with them.  They seem to work well under the vehicle and they give it a very 'purposeful' look !