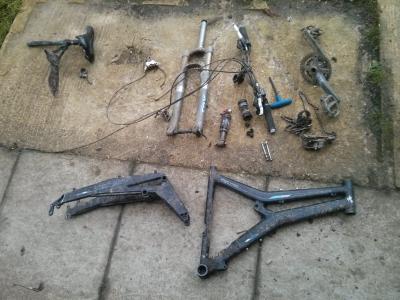 Just lately, we've been of the opintion that Kate's frame is too big for her.  She's been uncomfortable on it and lacks confidence in technical riding.   She really loves her Marin though, so it wasn't going to be a case of just changing bikes.   As a result, I've been looking around for a while for the smaller version of the Mount Vision frame and one fianlly popped up on Pinkbike a couple of weeks back.

The deal was done and a small frame arrived shortly afterwards.   The first job was to test our theory, so a couple of hours with the tools was in order to strip her current bike and build it up on the new frame.   Sufficed to say, the difference was remarkable.   Kate immediately felt better on the bike.  She was more comfortable with the reduced reach, and felt more in touch with the bike, more in control.

So, theory proved, it was time to make a decision.  The frame was a bit tired-looking when it arrived, with paint-wear and cable rubs.  It really needed a repaint.    Once again, out came the tools and the bike was stripped.   The frame went off to be stripped, ready for its new colours.