My Marin frame has died - spectacularly 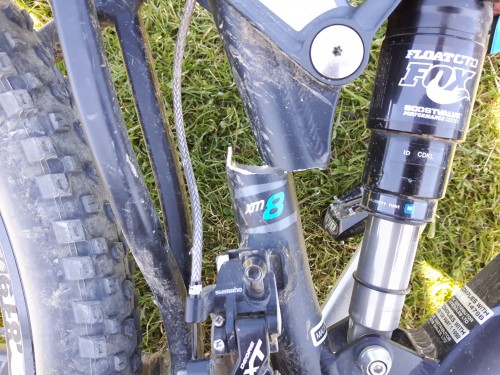 It was nothing really.  I was riding up a gentle trail in Scotland and, 'twang', my seat suddenly sank 6 inches.
My immediate thought was that the seat rails had broken, or maybe there was a fault with the dropper post.  It was only when I stopped and had a proper look that I discovered something a little more serious!

As you can see from the picture, the seat post on my beloved Mount Vision XM8 had snapped clean through.  I'd never seen anything quite like it before.   I've seen welds fail, even the occasional chain stay but for the seat post to fail like this was a total shock.

Obviously it put pay to my ride, and now I'm in the process of trying to get it sorted under warranty.   Marin have a 5 year warranty on full-suspension frames, but given that I've changed so many components and essentially got a custom build, I fear that the process won't end well for me.

So, fingers-crossed, Marin's UK distributor will be awesome and sort the frame under warranty.   If they aren't, then it's basically a few pounds of aluminium scrap and the hunt for a new bike will begin.  If that happens, I might be riding a non-Marin bike for the first time in years :-(

Bikes and bits. Posted 6 years ago