Off Camber XC MTB Race - Round 2 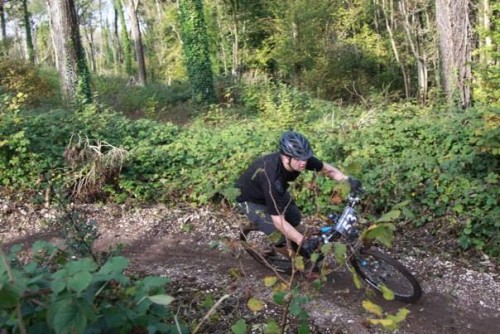 It barely seems like a month ago that I rode in the first round of the Off Camber XC MTB race series, but true enough round 2 had arrived.

The weather had changed a lot in the past few weeks, going from late Summer warmth to heavy Autumn rain; something I suspected was going to make the event a lot more tricky out on course.

On the morning of the event I was feeling really tired, almost tired enough that I didn't go.  I also didn't have the right state-of-mind, with a bit of a "can't be arsed" feeling about the whole day.    All that said, I decided that I should pull my finger out and get over to the event.  There are very few decent MTB events in the local area so it's important to make the most of them.

I arrived at the event in plenty of time and got myself registered, etc.  The format was pretty much exactly the same as round 1, although there was a short extra loop added.  From what we were told, the course was in good condition but was very wet which meant that especially in the forest sections, we'd need to be vigilant as tree roots can be a nightmare.

Despite the recent bad weather, we had a bright morning for the actual event.  There were just over 70 riders in attendance, so it was once again quite busy on the starting line.     As we set off, I tried to shake off my lethargy and headed out for the first ascent.  It didn't work.

Not to put too-fine a point on it, I really didn't enjoy the race.   My fatigue made all the climbs slow and tortuous.  I couldn't get into a proper rhythm on the downhill sections.  The root-strewn sections which I'd previously ridden with gusto became a full-on battle with the bike.   By about half way round the first lap, I had half a mind to just coast back and call it a day.    During round 1, there was a climb which hurt me every time.  It was near the end and was a short-sharp hill up to the top of the last descent.   Part of the new loop that had been added to the course actually dropped us further down the hill, making this last climb even longer.

I slogged my way up it, trying to stay positive but by the time I'd reached the top I was hurting.    I attacked the last technical stage of the course as best I could, determined to get some enjoyment out of the lap and managed to pick up a bit of speed, even gaining on the guys ahead.   The tyres on the bike were working well in the wet conditions and I had a fair bit of confidence in the singletrack.  As I rattled down through the rock garden at the end of the lap, I made the decision to knuckle-down and carry on.

By this point, I was pretty much riding on my own.  The nature of the course means that you do play cat-and-mouse with people and as before I was getting left behind on the climbs and catching people on the descents,but I just wasn't quick enough to make any difference to my overall position (which at this point I figured must be about last).   I could see from my GPS that my lap times were hopeless, nearly 10 minutes per lap slower than in Round 1.   I stopped pushing myself too hard and settled down to try and enjoy what was left of the lap.  I'd pretty much resigned myself to not carrying on for the last lap of the event.

Towards the end of my second lap, the inevitable happened and one of the race leaders caught and lapped me.  Funnily enough, I was neither surprised or that disappointed.   It meant that when I finished my lap, the race was over and I knew that I'd performed so badly that very little pride was left anyway :-)     The guys at the top of the table have incredible fitness.  Even when I was on better form in Round 1 they were lapping 8-10 minutes quicker than most of us.  This time round, that 8-10 minutes had turned into 15-20 minutes faster, and that means that they completed their three laps in the time it took me to complete two.

By the time I'd got back to the Land Rover, I'd had about enough.  It had been a tough morning and I hadn't enjoyed it.    Looking back it's not much better but I'm still glad I went.  Even the bad rides are better than no rides at all.

When the results came out, I was placed 44th out of 56.  Could have been worse I guess.  Hopefully Round 3 will be better.