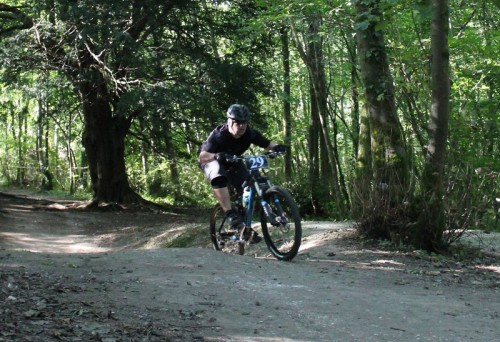 My quest to get into doing more organised racing got a kick-start recently with the announcement of the dates for the OffCamber XC race series.   OffCamber is our local bike shop, and they run the series through the winter months at a venue just a few miles away from my home.

The weather for Round 1 was superb; it was warm and dry.  The track condition was also great; dry but not dusty, with loads of grip.

I arrived at the venue in plenty of time to get registered and pay the (very reasonable) entry fee.   As always seems to be the case, there were plenty of friendly faces and plenty of total strangers happy to stop and chat.  There was the usual selection of amazingly fit-looking men and women with their lightweight XC bikes along with a slightly less usual selection of scruffy looking blokes on bikes like me :-)

Now despite what my ego makes me believe sometimes, I am certainly not an ultra-fit XC racer with a lightweight XC bike.   My bike (and physique) are much more suited to enduro style riding where gravity doesn't conspire against you all day.  I used to feel quite out of place at XC events like this, and would feel a bit self-conscious. These days I just get on with it in the happy realisation that nobody else really cares, so I shouldn't either.

The event was well attended, with 96 riders at the start line.   It was a simple enough format: 3 laps of the 5 mile circuit as quick as you can.  The winner is the first across the line.

As we lined up at the start, I took my customary position near the back of the pack and waited.   When the race started, the pack rolled off along the starting straight and riders jostled back and forth trying to find a line.   By the end of the first straight, a long snaking pack of riders had formed which was then thinned further by the long climb up a gravel track towards the woods.

The lap itself was a nice mixture of climbs, transitions, singletrack and descents.  There was reward for the work and there were definitely some 'big grin' moments.   I found the first lap a bit frustrating;  I'm too slow on climbs so I lost a lot of positions early on.  Conversely, I'm quicker in the singletrack and descents but it was nigh-on impossible to pass other riders in a lot of places due to the narrow stages.  I was struggling to get into a decent rhythm, but plodded on regardless and enjoyed a bit of banter with some of the other riders out on course.

There are a few nice features towards the end of the lap, the first being the large 'bomb hole'.  There's a nice, flat downhill approach and then you drop into the hole and up out of the other side.  On my first run, I messed it up completely !   I wasn't really paying attention, lost concentration and very nearly lost control.  My position was all wrong on the bike, I took the wrong line at the wrong speed and ended up coming down hard on my front wheel and almost ejecting myself over the bars.   Thankfully I managed to land it and cursed my own stupidity as I carried on to the next feature.

Not far down the trail, after a sneaky log climb and a steeper-than-it-looks hump came the rock garden.  Two short, sharp descents over rocks.    The rider in front of me, who was on a CX bike I think, had decided to bypass the rocks and dutifully hopped to one side as I approached and gave me a clear run down.   Thankfully, unlike the CX rider, I have a load of suspension travel on my Marin so it was a smooth ride down and out the other side.

Laps 2 and 3 were a lot more fun for me.  As most of the riders were fitter and quicker, I had a lot more clear space around me so after I'd slogged my way up the climbs I could get into a proper rhythm on the downhill stuff.   My Strava times for the laps confirmed this and whilst I wasn't especially quicker around the whole course I was much smoother and faster through the fun stuff.   Credit where it is due; my Marin bike just loves fast, flowy tracks and doesn't try to kill me every time it sees a root or rock on the course.    I managed to try a couple of different lines in some of the sections and really started to enjoy myself.  I even managed not to cock-up the bomb hole !

When my race distance was done there were plenty of people already at the finish line and predictably I had come in somewhere around 50th place in the field, but that wasn't what the day was all about.   It was a great event with some great riding.  Well organised and friendly.  I'll certainly be back for Round 2 in October.