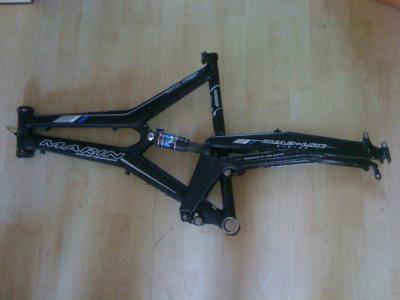 Fans of the BBC comedy 'Only Fools and Horses' will be familiar with Trigger's broom..  the more classically educated among you will know it as Theseus' paradox...

My old faithful Marin mountain bike is due a refit.  My current frame is getting on a bit... it's a bit heavy, and it's not disc compatible, so I've been looking around for something as a replacement.

Now, rather than just going and buying a new bike (where's the fun in that !?), I've been hunting around for a replacement frame, and I've found a corker.

It's a Marin (again), but this time it's a fully aluminium 4 bar set up from a Marin Mount Vision bike.

It feels almost weightless when you pick it up, and it looks *very* cool too :-)   I'll be swapping all the bits across from my current bike to the new frame over the next week or so.  I'll be taking plenty of pictures, so it should be fun :-)