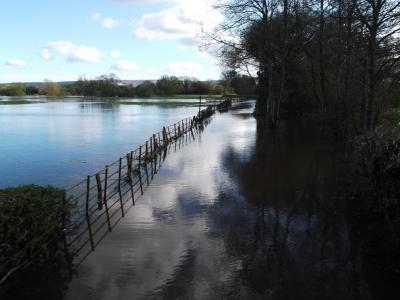 It's been widely reported all over the British media that we've had the wettest April for a gazillion years, and also the driest season of weather since the dawn of civilisation...

Well, it all just sounds like normal British weather to me... and it's one of the reasons I like to drive a Land Rover.   Aside from being slow, noisy and not entirely reliable.. it is immensely practical for where I live.    The snow, rain, mud and in this case, floods are not a problem.

Just down the road, and on my route to work, is Hammoon..  a tiny little place with a typically idylic style.   Running past Hammoon is the river Stour, and when there is a lot of rain, it tries its best to run right through the middle of Hammoon instead.

Well, we don't let a little thing like floodwater get in the way of the drive to work, and it did present the opportunity for a bit of photo-taking.

On one of the trips through the water, I took a bit of video too..  it's a bit shaky and rough, but you get the idea !