The rack has gone 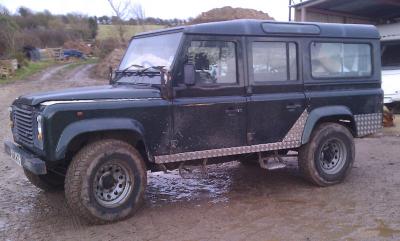 Work has commenced on the 110, with some bits coming off and some bits going on.

First on the hit-list was the roof rack.   I didn't like it at all...  it was fairly ugly and the way it was attached to the vehicle was unlike anything I'd seen before.   I fear that it has caused some damage to the bulkhead, but I need to do a bit more digging before I can confirm that.   Still, it's gone now and in the scrap skip :-)

A few minor bits went on at the same time.   I'm not usually one for slapping a load of chequerplate on a Land Rover, but there were enough scabby areas of paintwork that even I succumbed to the quick-fix !    Wingtop protectors and some side-sill covers have been dutifully riveted in place and the 110 is starting to look a bit nicer already.

Whilst the other jobs were going on, the rear door got its first coat of paint.   The rear door on there at the moment is pretty rough, so needs replacement.   I managed to source a good replacement, and set to work with a tin of Ardennes Green paint.   Just waiting for the clear coar to harden and I'll be able to start transferring the fixtures and fittings.   Then I think it will be on to the bumper...

There's plenty left to do, but hopefully it will be worth it !