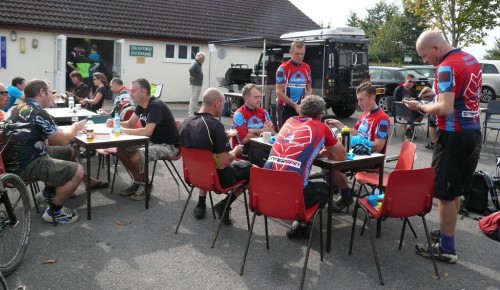 In addition to running weekly rides and gatherings, my local mountain bike club, The Dorset Rough Riders, hold a couple of larger events each year.   There is typically one in the Purbeck area of Dorset in the spring and another in North Dorset in the late summer / early autumn.

Last weekend marked the 4th event in this series; a 37 mile route starting and finishing in my lovely home village of Okeford Fitzpaine.

The same event last year started and finished at the (currently closed) UK Bike Park just outside the village.  Uncertainty about the status or future of the park meant that a new venue was needed.  Thankfully the Parish Council and Football Club in Okeford Fitzpaine were happy to oblige and the recreation ground in the village became the base for this year's event.

Behind the scenes the DRR committee had been working hard as ever, organising the event promo and receeing the route.    I had planned to ride the event myself, but a last minute change found me volunteering to run the end-of-race barbecue instead !

On the day, the weather was fantastic; warm and dry, and as the eighty-four riders arrived and then set off on the ride everyone had smiles on their faces.   The oldest rider on the day was 75 with the youngest being 15; now that's a good age range !

A few hours later, the first of the riders returned to the base and were, for the most part, still smiling !

Well done to everyone who took part, I was a bit jealous on the day that I didn't ride with you but I've got the route so I'm planning to get out there and do it in the near future before the weather turns too bad.  Well done and thanks to the organising team, everything seems to be very smooth on the day.   Thanks to the local village hall committee members who stayed all day to provide tea, coffee and cakes :-)