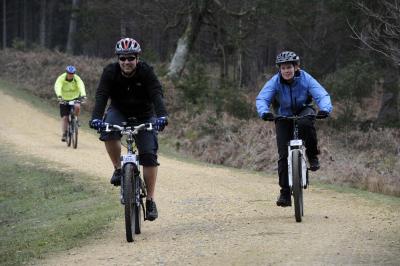 With the bike built up on the new frame, it was time for a proper outing.

The opportunity presented itself in the form of the Spring MTB event in the New Forest, part of the Wiggle super series.

The event is actually run by UKCycling events, and they did a fine job.  The route we rode was just over 26 miles and was well thought out and well signposted.

It was an early start (up at 5.30am) on a Saturday morning to get us to the meeting point at Brockenhurst college on time.  Once there, we got ourselves registered, picked up a few goodies along wih our numbers and timing chips and went off to get ready to ride.

It was the first organised ride I'd been involved with, so I didn't know what to expect, but it was really quite effortless.  We gathered at the start line when we were ready, got a quick briefing and set off in groups of around 20 riders.

As the ride went on, the starting groups quickly broke apart, leaving some people riding solo, whilst others kept pace with each other.  The whole ride had a great atmosphere, and despite it being essentially a time-trial, riders were happy to wait and hold gates open for each other or stop to offer mechanical assistance when needed.

It was also really refreshing to see a diverse mix of people out on the route; fast, slow, young and old... everyone was there to enjoy the day.

The going was tough at times, and I was lucky to be riding with my biking buddy Kate.. we managed to keep a good pace over the route, both egging each other on, and holding each other back when the course demanded.

About 2/3 of the way through the route, Kate suffered a puncture in her rear tyre.  Obviously we had to stop for a few very frustrating minutes to change the tube, and we were on our way again.    Aside from this, and a couple of adjustment issues on a rear derailleur we were blessed with a trouble-free morning.    We're going to be looking at puncture-resistance products for the next event to see if we can prevent a repeat.   The tyre slime that Kate had in the tyre failed to do its job, but did make it very easy to find the puncture due to the little green splodge that appeared on the tyre !

Reaching the end was a great feeling... we'd managed a respectable 'silver' time, and we both reckoned that we could have gone a bit faster...  we weren't far off the 'gold' times, so that's the aim for the next run.

Next up, we're looking at doing the Test Valley Tour hot MTB challenge in May...  it's bit longer at 50Km, but we've got the bug now so there will be no stopping us !

Rides and events. Posted 6 years ago