Time for the winter tyres 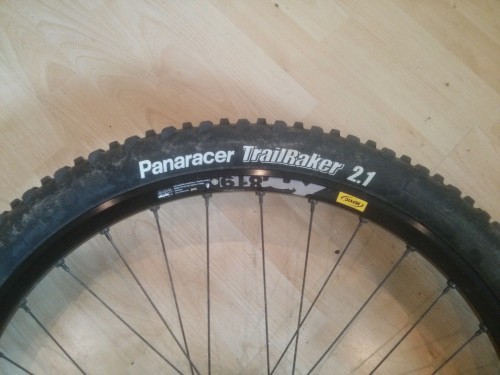 Well, I managed to make it through to October, but the time has come to put my winter tyres on.

I know a lot of people just run the same tyres all year, but I prefer to change between the seasons to try and get the best of all worlds.    In the earlier part of the year I was running a set of Panaracer Rampage.  I like them as an all-rounder;  not too slow on hard-pack and reasonable mud traction.  They're also nice and stable in the corners.

The Rampages were swapped out at this year's Bontrager TwentyFour12 event which was, you'll find out if I ever get round to finishing my write-up, incredibly hot and dry.  I put on a set of Bontrager XR3s which proved to be superb around the course; fast-rolling, and in the 2.2 width they were really nice in hard corners too.

That was all great until the start of this week.  I was out on an evening ride with some friends not long after some reasonably heavy rain and whilst the XR3s were fine for a lot of it, their weakness in the mud became very apparent very quickly.   I was slipping around in the corners and losing rear wheel traction on most of the climbs.    To top it all, I picked up a massive puncture in the rear wheel near the end of the ride, so I decided it was time to swap.

Now usually I'd have probably put a set of Rampages on there at this stage,  but I decided against it because:


So,  time to bite the bullet and swap them out.   My winter tyre of choice is the Panaracer TrailRaker.   It's a very aggressive looking tyre and you can feel the drag on hard-pack as a result.   The pay-off though is that in the mud it has more grip than any other tyre I've tried.    You can really pound on the pedals and just when you think it's going to let go, it manages to find more grip !   Up-front, it gives you the confidence that your wheel isn't going to wash out if you hit a slippery corner.

Hopefully I won't regret going straight to the TrailRakers.   The next round of the OffCamber XC series is in a couple of weeks, so it will be interesting to see how they run.